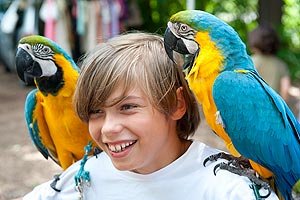 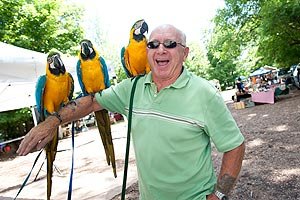 Early one misty Sunday morning at Mower’s Meadow flea market in Woodstock, vendors unloaded vans packed with goodies for the day’s sale. A woman among them stood out, her turquoise and white flowing garb echoed by three macaw parrots that she was settling onto the branch of a large maple tree. Behind her booth was a large banner proclaiming “Parrots for Peace.”

Gloria Waslyn has a job to do as the self-appointed caretaker of three “spokesavians.” Merlin, Baby and Peacenik have a message that they would like the world to hear. It’s a simple lesson, according to Waslyn. The birds want there to be “peace among all people, animals and nature, and to share life in harmony with our one mother, Earth.”

People are drawn to these three well-mannered birds. As they stop to admire the parrots, Waslyn asks, “Would you like to hold them?” Sometimes there is a hesitation; a child feels awkward, but this feeling disappears as Waslyn encourages, “Don’t be afraid, they won’t hurt you.”

With three birds perched on her shoulder and a camera around her neck, she leads her audience over to the “rainforest” section of the meadow: a patch of trees that provides a backdrop for a photo shoot. One bird is placed on a shoulder, another bird on the other shoulder and a third on an outstretched arm. “Just pretend you’re a tree,” Waslyn tells a teenage girl. Once the person begins to relax, an exchange takes place. Questions are asked and answered. Waslyn says she communicates on behalf of the birds.

The birds perform charming stunts, one of them lying serenely on his back in the upturned palms of a willing participant. Throughout their performance, Waslyn repeats the message of the birds while snapping souvenir photographs.

The Parrots for Peace seem to have a good agent in Waslyn, whose former jobs included business coaching in the financial sector. Waslyn’s partner Cameron provides tech support for the birds, whether it be burning a disc of souvenir photos or updating the birds’ blog.

With her ability to be in the right place at the right time, Waslyn and the birds have managed to be in Wappingers Falls to sing with Pete Seeger over the years. They’ve hung out with Friends of the Clearwater and have hobnobbed in Central Park with Yoko Ono and Sean Lennon. They’ve met Gasland filmmaker Josh Fox and make regular appearances at the United Nations, various eco-fests and Native American gatherings around the country.

According to Waslyn, the parrots believe in lending a feather to support the anti-fracking and clean water movements as well. “There needs to be a shift to a culture of peace in our policies and economic framework,” Waslyn says. “We need to change the way we think: to recognize that we are all one, we are all connected. This is the primary message of the birds.”

Macaws generally live between 90 and 120 years. At Mower’s Market, a concerned young girl asks, “If they live so long, who will take care of them when you’re gone?” Waslyn says that it is her dream to build a parrot sanctuary. Maybe the young girl will help, she suggests.

Look for Merlin, Baby and Peacenik at Mower’s Flea Market on Saturdays and Sundays this summer and fall or join them at the third annual International Walk for World Peace on Saturday, August 6 in Woodstock. The event will be held rain or shine and is sponsored by the Woodstock Chamber of Commerce & Arts. Gather at 10:30 a.m. at the Cucina parking lot at the intersection of Routes 375 and 212. The parade will proceed through Woodstock and finish up at Comeau Field. For more information, visit https://parrotsforpeace.org